A Highly Sensitive Person (HSP) is used to hearing “you’re too sensitive”. If you’ve been told this, you’re probably aware of experiencing things more intensely than other people do. And of reacting more strongly to everyday things in life that others don’t even see, hear, feel, or notice.

Non-HSPs may feel annoyed or confused by an HSP’s (your) reactions. Especially if they don’t know that what is really going on with you is “HSP overwhelm”. Or even what I call an “HSP hangover.”

Confusion and frustration as a Non-HSP add fuel to your believing something is wrong with you. That you’re just weird.

1. A main feature of being a Highly Sensitive Person is to feel things deeply.

To have a heightened awareness of and responsiveness to the environment- be it others’ moods, physical features such as light or temperature, or subtle details. Everyday environments can be overwhelming because of how your nervous systems reacts to sights, sounds, emotional cues, and other stimuli. Everything is more vivid. As if in high def.

High Sensitivity is an innate trait, not a disorder. About 15-20 percent of the population are HSPs, with an equal male to female ratio. The trait is present in over 100 species. Research continues to identify additional species who also have highly sensitive.

Being in a minority, HSPs experience life fundamentally differently than does the other 80-85% of the population. The world is set up for the 80-85%. Stimulation levels are designed for people without the trait.

Non-HSPs may characterize an HSP’s behavior and emotions as “too much”. As in the HSP is “too sensitive”, takes things “too personally”, and needs to “lighten up”. Can’t she take a joke?

In reality, the HSP isn’t too anything. She is just right. Even if her behaviors and emotions are different from yours as a Non-HSP.

To learn more about being an HSP, check out Dr Elaine Aron’s seminal book.

HSPs’ brains are different. We naturally process information on a deep level. HSPs also see nuance and subtle connections. We care about people and social issues in a profound way. That is just how an HSP’s nervous system works.

The Highly Sensitive Person’s brain has been referred to as “the most powerful social machine in the known universe”.

Here are three reasons why :

4. Without HSPs, the human race would not have survived.

Humans have survived because of HSPs’ responsiveness, awareness, and attention to subtlety. An HSP is more aware than a non-HSP of opportunities (e.g., food, mates) and threats (e.g., predators, competitors) in the environment. He is therefore well prepared to respond to a range of situations.

Remember, an HSP processes information more deeply than a non-HSP. And she learns from experience, which she then likely applies to subsequent situations. Compare this to a non-HSP, who may be inclined to impulsively respond and with less recall from previous experiences.

On a fundamental survival level, we have HSPs to thank for our mere existence as a species.

Why does this matter?

The world is not set up for sensitivity, cautiousness, reflection, or pondering.

Society in general has difficulty dealing with high emotions. People accuse others with intense emotions of making too big a deal out of things. And label feelings as inappropriate or wrong.

Deeply experiencing the world around you is a blessing. You don’t need to keep feelings under wrap or pretend not to have them. Nevertheless, you, like all HSPs, deserve for others at least to be receptive to how you operate.

We all want to be understood. To have better, more effective communication. More thoughtful ways of approaching our concerns, fears, and worries. We seek validation, love, patience.

I am a private practice clinical psychologist in the Boston area. To learn more about thriving as a Highly Sensitive Person, contact me here.

Posted in Thriving As A Highly Sensitive Person
Leave a comment Regardless, every single person deserves to feel at least neutral and safe in their body. That’s your birthright.

Before you read inspirational body image quotes, nonjudgmentally notice how you feel. Especially about and in your body. And then check back in with yourself after reading them.

Be curious about any differences in how you feel before and after reading inspirational body image quotes.

If you feel even a smidge better –or less bad — after reading them, it’s a win.

Body image is important for lots of reasons. It’s linked with self-esteem and health.

Negative body image is so common it has been called “normative discontent”. Feeling miserable in and about your own body is normal in our culture. How sad!

It does not have to be this way – normative discontent is more than sad; it is bulls*it.

An alternative that’s within reach for everybody is called body neutrality.

It’s the concept that you can simply exist, worthy of respect, without thinking about your body. Or, maybe you feel good about your body one day and not so great about it the next.

Body neutrality is a bridge between body loathing and body positivity. And a worthy pursuit in its own right.

Consider these inspirational body image quotes. They may help move you toward body neutrality…. or beyond.

2. “Your body hears everything your mind says.”

3. “We cannot heal our own body image by judging, shaming, objectifying or pedestaling other bodies”

5. “You can’t hate your body into a version you will love.”

6. “Apologize to your body. Maybe that’s where the healing begins.”

8. “Of course you look different. You aren’t made with a cookie cutter.”

10. Girls don’t just decide to hate their bodies. Culture teaches them to.

11. My ideal weight is my weight holding 5 puppies.

12. You have to stand up and say, ‘There’s nothing wrong with me or my shape or who I am; you’re the one with the problem!’

13. Life is so much more beautiful and complex than a number on the scale.

15. “Mother Teresa did not walk around complaining about her thighs.

She had shit to do!”

Where thoughts go, energy flows. Notice your thoughts. Ask yourself if you would speak to a friend in the same way.

More often than not, you may automatically think about your body harshly. As in using words you’d never ever say to a friend about her body. And, if you heard her use the same harsh language about her body, you’d probably correct her right away. And be sad that she is being such a bully toward her body.

Speak to yourself as you would a friend.

Back to inspirational body image quotes:

16. Who cares if there are lumps on my thighs? I’m guilty of having human legs made up of fat, muscle, and skin, and sometimes when you sit, they get bumpy.

(Ever hear a toddler complain about her thighs?)

17. “I don’t look in the mirror and go, ‘Oh, I look fantastic!’ Of course, I don’t. Nobody is perfect. I just don’t believe in perfection. But I do believe in saying, ‘This is who I am and look at me not being perfect!’ I’m proud of that.”

19. “Don’t waste so much time thinking about how much you weigh. There is no more mind-numbing, boring, idiotic, self-destructive diversion from the fun of living.” 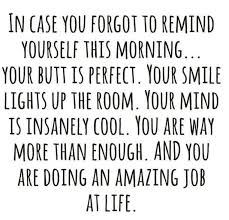 21. “People often say that beauty is in the eye of the beholder, and I say that the most liberating thing about beauty is realizing that you are the beholder.” -Selma Halyek

You, yes you, are the Beholder.

Who defines you? YOU define you.

P.S. Check back in with yourself: Is your relationship with your body any different after than before you read the post? Remember, a smidge counts!

I am a non-diet, Certified Intuitive Eating specialist and clinical psychologist in MA. If you’re struggling with your body image and/or eating disorder, please contact me here.