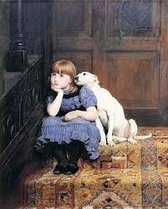 Whatever it is, try the savored version

“Until one has loved an animal, a part of one’s soul remains unawakened” —Anatole France

What do you think when you look at this picture?

My Nana and I used to look at pictures and then take turns telling a story about the picture.
She was a phenomenal story teller!

I miss that. I miss her.

I listened to a TED talk recently about happiness.

One of the speakers told a story that really stuck with me.

He said that he had lived most of his life in such a rushed state that he would skip pages of the nightly bedtime story he read to his young son. The boy, who had memorized the story, would call his Dad on it. The dad, partly annoyed and partly impressed with his son’s intelligence and memory, would sheepishly then read the pages he had skipped.
When the dad found an advertisement for ‘one minute bedtime stories’, he was shocked by his own reaction. He wanted to order the series. But, then it struck him.

Reading bedtime stories to his toddler was one of his favorite activities of the entire day, and here he was rushing through it.

What do you rush through, that if you were to savor, you might discover some joy?

Savoring moments is a key feature to happiness.

Whether it is savoring the time with a pet,  with shared storytelling, or with anything you choose,  experiment with moments of savor.

Maybe even some of the more mundane activities of the day could become savor-y? After all, each moment is savor worthy, in some way or other.